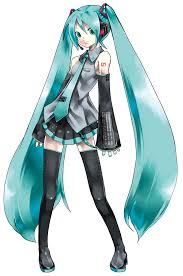 There are no one that don't know Hatune Miku among heavy net users. Digital voice named Miku gave something evolutional to music, and it has made the idea of the singer upper level.

Now, many people regard her as a vartual idle and love her songs. She has won glory since her apperence. But We (Japanese Otaku, especially called Nicochu(fan of Niconico douga)), had thought her as “just only a toy” until the day she went on sale. I'll introduce several days form the day Htune Miku appeared before us.