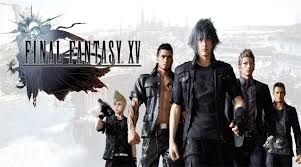 Attention: This article contains the spoiler of FF15.

It is ten years since FF 13 released. All of the fan of Final Fantasy welcomed FF 15. LP youtubers wanted to broadcast the playing it, and anyone wanted to be the firstest broadcaster. Some of the players uploaded videos just like they are as fast as light. This is the legend of the PLers.

(This copypasta is edited for reading easily)

FF15 Heros of Light -the Myth

Dubatis: Dubai's youtuber (~~tis is from the hero of FF 15: Noctis)

The first hero of light, who is known by everyone. (His characters reaches 99 lv.)

He is a hero who is an heir of the Dubai Kingdom, and he had played FF15 for over 20hours without sleeping, and exposed the truth FF 15.

He loves FF and has mild nature. “FF 15 is fun. But Episode 13 needs to be deleted, and the story has something strange.”

The second hero of the light.

Ardyn, the last boss, assimilate with Step-Wagon(Honda's car) because of a bug. He fight against the last boss and the last form “Step-wagon” He is exactly a Tragic Hero.

The third hero of light

Because of the bug, the sign of “AP1” was not gone, it was, unfortunately, over the brother's head of the heroine. It was natural that he became to be called “AP1.” Immediatly after the best of the best words in FF series “It's more than I can take,” his broadcast was forced to be banned.

The fourth hero of light.

He loves FF and has lively temperament.

As reaching the end of the episode, his expressions disappeared little by little, and began to say Fxxk repeatedly. While the hell episode 13, his mind was broken, and stopped broadcasting.

He left the word “NO BUY,” and had gone in the dark.

After a while FF15 released, it was found that he is the fastest hero of light in the world.

He broadcasted on twitch, and showed us the ending in both Japanese and English. It encouraged people to watch a spoiling LP on time. The next day, Dubatis was found by the Internet users. It is prequel to Hero of Light.

He is the true hero of light.

The day before the release of FF15, on the live program on which stuff of FF and relatives were going on the spree,

“Noct in Versus is different from in FF15.”

“When reading the plot, he looked only selfish, so I stopped the recording for an hour, and we held the meeting.”

He commented such to the stuff and that was like a friendly fire.

He had been fighting by himself for 7 years.

“It's more than I can take” may have been his real intention for FF15.

His ability makes even enemies' murderous design disappered (he encounted the bug which enemies didn't attack).
In order to this bug, he couldn't do a magic counter. So, he had to wait for recovering Noctis' MP. Under the situation, He was going to restroom and smoking. Finnaly he cleared episode13.

He was also going to the different dimention outside the map. He made us known the vastness of “The 10Years Open World.”

The only picture which was taken as a memoies of the jurney was “Cup Noodle.”

Seeing that Noctis and Luna was looking at the picture preciously, the LPer couldn't stop laughing and was forced to train his abs.

It is what is called “Cup Noodle End.”

This copypasta is some examples of the LPer's movies. Besides this, Wokatis: an enthusiastic FF lover in Japan who was fallen into the abyss, and screaming the words of curse like “10 years! My 10 years!!!! Tabataaaaaaaaaaa! I never forgive you!!!!(Tabata is the chife of FF15).” And there is also “Cindy's Brest End.” By the way, I haven't played 13, 14, 15 yet because of the sealing of the crystal.

Seeing the review all over the world, FF15 is fun, but, in Japan, the rating is low. Whether FF15 is fun or not is up to you.